When I published Flower of Iowa a year ago, I never could have imagined where this journey would take me and my book. To the top of the Smashwords Gay Fiction charts. To tea in London with the extraordinarily erudite Stephen Fry, who kindly tweeted “Reading a truly wonderful WW1 novel” to his 7.7 million Twitter followers. To the pages of Kirkus Reviews, where the book was proclaimed “accomplished, touching historical fiction.”

Chuck and I have given readings from Provincetown to Fort Lauderdale, from the shadow of Wisconsin’s Capitol to London’s Tavistock Square. Perhaps our smallest audience was a group of gay vets in the Midwest, yet how powerful to hear their own stories from Vietnam and Iraq, and their heartening response to the book. At Milwaukee’s LGBT Center, one younger attendee raised his hand and asked, “Is this gonna have a happy ending, or is it gonna make me cry like Brokeback Mountain?”

Sponsoring organizations have been wonderfully eclectic, perhaps none more so than the Bureau of General Services, Queer Division, which first hosted us to a modest house last summer on Manhattan’s Lower East Side, and then allowed us to speak last week at its new digs at the renovated NYC LGBT Center, before an enthusiastic group twice as large. Afterwards, two audience members told me about their grandfathers who were First World War I veterans: one gassed, one poisoned, both lives shortened by the conflict, though appearing on no official casualty list.

These in-person encounters have been gratifying, and in our wired world, hearing from strangers via cyberspace has been, too. It’s one of the unsung advantages of an eBook: How else would I hear from military history buffs in the UK and Australia who took issue with my blogposts about the Battles of the Somme and Hamel respectively? We hear constantly how the Internet and social media have affected our lives adversely, but we take for granted their positive ability to connect us with global conversations on subjects of common interest.

When I wrote my first Flower of Iowa blogpost a year ago, I started with a simple thought: This isn’t about me; it’s about them – that is, the novel’s characters. And it still is. Oh, sure it’s been great to be interviewed, and it’s even better to perform the readings with Chuck Muckle, the love of my life, whose participation has vastly improved their quality. But ultimately, what’s been so important – so rewarding – is that more and more people have come to know Tommy Flowers and David Pearson and everyone else in their world. Sometimes the reactions have been surprising; one reporter told me she found Tommy and David “adorable” – not a word I would have chosen, but there you have it. For me, the most satisfying line in the Kirkus review was “Ringel has created an overall appealing romance with memorable characters, particularly open-hearted Iowan Tommy.” And during Memorial Day weekend, blogger Amos Lassen posted a favorable notice that included the comment, “The characters are those that we love to love or love to hate.”

Thanks to everyone who has helped make Flower of Iowa’s first year of publication such a wonderful, unexpected journey – one that is, I am delighted to say, far from over.

Please enjoy photos from our reading at the Bureau of General Services, Queer Division at The Center in NYC last week: 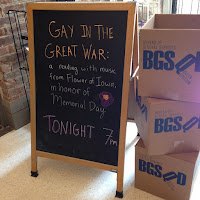 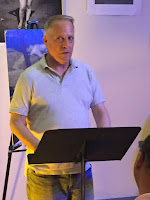 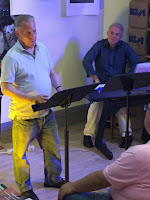 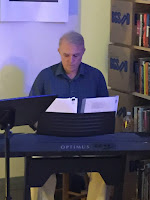 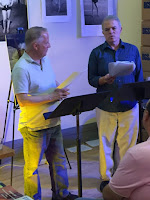 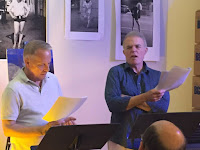