A Teachable Moment in Dublin

Lest you had any doubts, I can assure you the legendary hospitality of the Irish people is very real. The evidence starts with an invitation that was kindly extended to my spouse Chuck Muckle and me to help kick off the 14th annual International Dublin Gay Theatre Festival – the largest such gathering in the world – at a World War I seminar titled “Love in the Trenches.” Then The Irish Times, previewing the event, referenced “Lance Ringel’s cult novel Flower of Iowa” in the write-up. (I had no idea I’ve written a cult novel, but who am I to argue with The Irish Times?)

Finally, on April 30, we had the extraordinary privilege of giving our dramatized reading from the book to an extremely attentive full house at the venerable Teachers Club on Parnell Square. At the conclusion, we were greeted with two standing ovations. You can read more about this afternoon featuring the “esteemed American author” and his “beautifully told” story(!) by clicking here. 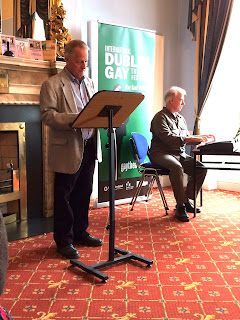 As the review notes, we shared billing with an erudite presentation by the Festival’s indefatigable Founder and Artistic Director, Brian Merriman.  Any look back at World War I in an Irish setting inevitably reflects the nation’s vexed relationship with a conflict that took place when the entire island, not just the northern part, was still officially a part of Great Britain. Somewhere between 30,000 to 50,000 Irish soldiers died in the Great War (the figure depends on whether or not you count those from the Irish Diaspora who fought and lost their lives in other armies), while the immediate death toll from the Easter Rising of 2016, which took place in the midst of WW1 and ultimately paved the way for an independent Ireland, was about 500. Yet it is the Rising that is looked back upon with reverence in Ireland, while the service of those Irish soldiers is regarded with profound ambivalence. Indeed, such is the deference given the Rising that according to Brian, at last year’s seminar, which observed the centennial of that event much as this year’s was timed for the centennial of the American entry into the First World War, a gay Irishman objected to his identifying notable figures Roger Casement and Padraig Pearse as gay men!

As for the Festival itself, Brian and his dedicated squad of volunteers create an annual miracle on the Liffey, producing two weeks of theatre that make a special trip to Ireland each May well worth the while.  Chuck and I caught three of this year’s plays, two Irish and one Scottish, and found much to admire in each of them.

All in all, our Dublin adventure was a definite high point in the journey of Flower of Iowa, a book that continues to command attention three years after its publication. That journey will continue apace on Memorial Day, when Hudson Valley, New York residents and visitors can catch our presentation (including a WW1 sing-along), at Dutch’s Spirits at Harvest Homestead Farm, 98 Ryan Road in Pine Plains, New York. The action starts at 1 p.m. on Monday, May 29. Admission is free, and no advance reservations are required. You can register to attend via Facebook by clicking here.

One final note: You can easily download Flower of Iowa for your Kindle by clicking here. To download with iBooks on your Mac or iOS device, and with iTunes on your computer, click here. For Nook users, please click here.