Lingering echoes of a long-ago November

As the observance of the Great War Centennial wheels around to another Veterans Day, I will be offering, with Chuck Muckle, a dramatized reading from my historical novel Flower of Iowa that also features WWI-era music at the Greenfield Public Library in Greenfield, Massachusetts, on Wednesday, November 1. Details are here; the event is free and open to all.

It is, as always, striking to look back at what happened 100 years ago, and discern how very much the First World War is still with us today. In this case, I would like to home in on three events that took place over the course of eight days a century ago.

On the 31st of October, 1917, the British began a surprise attack against Turkish defensive lines stretching between Gaza and Beersheba in southern Palestine, aided by a group of fighters led by one T. E. Lawrence — better known to us now as Lawrence of Arabia — who played a key role in the Arab uprising against the Ottoman Turks. 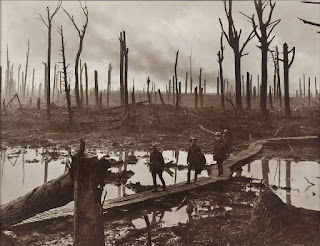 Seven days later, the village of Passchendaele in Belgium was captured by Canadian troops, bringing to an end a months-long battle that had caused 500,000 casualties on both sides, with no significant gains for either.

On the other side of Europe, that same evening, the Bolsheviks overthrew the democratic Provisional Government that had been established in Russia after the fall of the Czar earlier in the year, and established a decidedly non-democratic Soviet government based on Marxism.

For the characters in Flower of Iowa, these three seemingly disparate events have profound effects. The British/Arab victories in the Middle East, and the decision of Soviet Russia to leave the war, mean that by the time the novel’s lead character, Tommy Flowers, arrives in France in 1918, Germany has been able to throw its full weight into a final offensive in an attempt to rout the Allies on the Western Front.

Tommy’s comrade, British soldier David Pearson, who has lost a brother at Passchendaele, is part of the stiff British resistance that has stalled that offensive, and Tommy is part of the American Army that helps to turn the tide in the Allies’ favor — exactly what the German High Command feared, and caused them to throw the dice on the aforementioned offensive in the first place.

By the same token, all three events continue to echo in our world today, where the unresolved aftershocks of the Arab drive for self-determination are still felt in Gaza and Palestine, and well beyond; where the horrific memory of Passchendaele continues to feed antiwar movements, especially in Europe; and where Vladimir Putin bases his every geopolitical move with the memory of both the Czar and the Bolsheviks ever fresh in his mind. 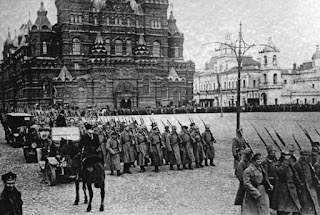 “Living history” may seem like a cliché, but we are indeed still living with the reverberations of the events of those fateful eight days a century ago.