San Francisco and the Great War

Five years ago, I published Flower of Iowa, my World War I novel about two soldiers who fall in love on the Western Front in 1918. Since then, the success of the book has taken my husband, Chuck Muckle, and me on a journey far and wide. We have presented our dramatized reading from the novel — with Chuck performing songs made popular during the war — to appreciative audiences from Paris to London to Dublin, from Fort Lauderdale to Provincetown to Madison. 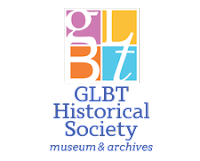 This month, finally, the Flower of Iowa road show comes to America’s West Coast. On the date originally celebrated as Memorial Day, May 30, we bring our presentation to San Francisco’s GLBT Historical Society Museum.

Tommy Flowers, the hero of my book, is a Midwesterner through and through, a native of central Iowa serving in the 33rd Division (originally an Illinois National Guard unit).  There can be a temptation to assume the American Expeditionary Force that went to France in 1918 was comprised overwhelmingly of young men from east of the Mississippi, or at least the Rockies. But by 1917, the year the U.S. declared war, California boasted the ninth largest population of any state in the union — more than three million — and sent more than 100,000 soldiers to the U.S. Army and Marines. The state’s WW1 Centennial Commission has an arresting logo that combines the California golden poppy with the blood-red poppy of the trenches featured on the cover of my novel. 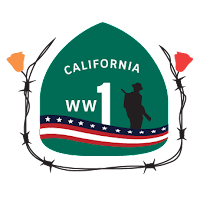 Two American divisions in the Great War drew most of their men from the Golden State. One of them, the 91st, saw action in the Meuse-Argonne Offensive, which plays a pivotal part in Flower of Iowa. American forces attacked along a front of about 18 miles; appropriately enough, the “Wild West Division” advanced on the western edge of that front even as the 33rd, Tommy’s division, was gaining ground on the eastern end.

Among the archives of the GLBT Historical Society Museum are the papers of one Clarkson Crane, a Chicago native who relocated with his family to the Sacramento area. He served as a driver in the U.S. Army Ambulance Corps, receiving the French Army’s Croix de Guerre. Upon discharge, Crane came home. (For gay military personnel and the Bay Area, this contrasts a great deal with the next war. As Allan Bérubé so ably depicted in Coming Out Under Fire, San Francisco became a gay epicenter after World War II, partly because it was the first place in the U.S. to which enormous numbers of servicemen and -women, their lives changed by the Pacific War, returned and, looking around to see like-minded souls, decided not to go home.) 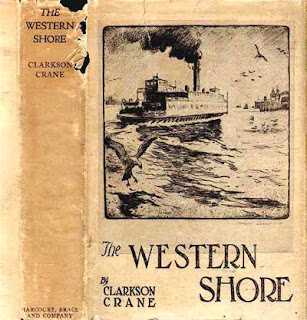 In 1924, Clarkson Crane returned to France, becoming yet another expatriate in the Paris of the era made legendary by Gertrude Stein and her circle. There he wrote his first novel, The Western Shore, which daringly featured a main character who clearly was homosexual. Published in 1925, it failed to gain a wide audience.

The following year, Crane returned to San Francisco and met Clyde Evans, with whom he would spend the next 47 years. I was struck by the personal parallels in Crane’s story: An Illinois native, I, too, have published a novel with a gay character. And I, too, have spent more than 40 years with the love of my life. I can’t wait to pay my respects to this kindred spirit when we visit the Museum.